Read this article and use it as a reference for this project:


Lab Activity: The Atmospheric winds in a Cake Pan


In this activity, we repeat an earlier activity.  This time we are modeling the air movements that occur when air is cold in one place (for example, at the poles) and hot in another (for example, at the equator). We use water to represent air in the lower part of the atmosphere (i.e. the troposphere) because it's easier to observe the motion of water than it is to observe the motion of air. Keep in mind, however, what each part of the model represents:

a.   Place the small beakers upside down on the lab table, forming a triangle that the cake pan can rest on and remain stable. Place the cake pan on the three beakers.

b.   Fill the cake pan with water.

d.   Put some ice in the large Ziploc bag and place the bag of ice in the cake pan on  the side opposite the candle. This end of the cake pan represents the cold polar regions of the earth.  The setup should look like the diagram below.

1.   Before you add the food coloring, in which directions do you think the water will move?

2.   Explain why you think the water is moving this way.

e.   After the cake pan has rested undisturbed for a few minutes, place several drops of blue food coloring in a line along the bag of ice, near where it touches the water (see diagram below).

f.   Carefully place several drops of red food coloring into the water in a line along the BOTTOM of the cake pan directly above the candles

g.   Watch the motion of the colored water and answer the following questions.

3.  Describe the movement of the two colors?

4.   Please explain why you think the colors moved like they did.


For questions 6–13 below, imagine that you are a tiny water-breathing person, usually walking around on the bottom of the cake pan but sometimes “flying” up in the water in an airplane.


6.   As you fly around in the “air”  (the water in the cake pan), near the top of the troposphere, where do you feel the highest water pressure, near the ice or near the candle? Why? Hint: remember density.

7.  Where would you place an “H” showing high pressure, near the ice or the candles”?


Where would you place a “L” showing low pressure near the ice or the candles?


8.  As you walk around on the “ground”  (the bottom of the cake pan), where do you feel the highest water pressure, near the ice or near the candle?

9.  When you “fly”  (in an airplane) up to the upper part of the water “atmosphere”  near the center of the cake pan, which way do you feel the “wind” blow?


Get Mr. B to come over and have a group discussion about these questions:


11.  Where the air is rising, the air pressure aloft is   higher  / lower  than it is at the same level wherever air is not rising.


12.  Where the air is sinking, the air pressure aloft is higher  / lower  than it is at the same level wherever air is not sinking.


15.  Winds aloft tend to blow from the pole


Use what you have learned from the activity to explain how air on Earth moves.


16.  Where the air is rising, the surface air pressure is higher  / lower  than it is where air is not rising.


17.  Where the air is sinking, the surface air pressure is    higher /   lower  than it is where air is not sinking.


18.  The polar regions are characterized by relatively      high  / low atmospheric pressure at the surface.


19.  The equator is characterized by relatively  high /  low  atmospheric pressure at the surface.

20.  Winds near the ground tend to blow from   a: the pole to the equator  or b: from the equator to the pole.


21.  On the picture of earth below, use arrows to show the air movement (i.e. atmospheric convection) that you think would result from the differences in air temperatures between the equator and the poles. To keep things simple, show the air movement just on the outside “edges”  of the earth.

Draw this diagram in your journal and label it according to the instructions. 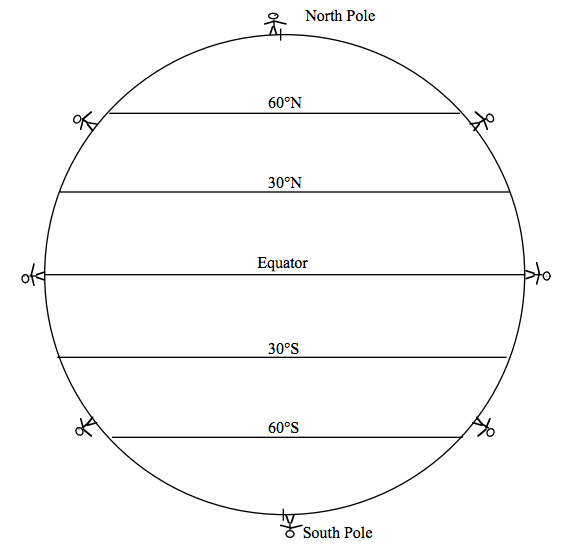 1.   Without spinning the globe and using the metal arch around the globe as  a guide, draw a straight line from the north pole to the equator.

2.   Repeat step #1, but this time spin the globe slowly and steadily in the appropriate direction.

3.   Repeat steps 1 and 2 but draw your line from the south pole to the equator.


Question: What was the difference between the two lines?