Your team is going to go into the hallway and create a hallway solar system.  You need to read the Hallway Solar System website and follow the directions there.


Before you begin, answer the following questions:

1. Can you state the order of the planets from nearest to the Sun to farthest away?


2. Do you think the inter-planet distances (distances between neighboring planets) are uniform?


3. If not, is there a pattern to the intervals or are the differences random?


Use the floor tiles. 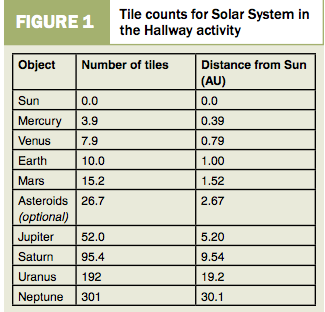 After your team has created the model, answer the following questions:


1. By sight, what is the closest object-to-object distance? Record the names of the objects and your estimate of the distance in number of tiles.


3.  Record the distance (in number of tiles) from the Sun to Mercury.


5.  When you are at Earth, record how big the Sun appears using your ruler.


7.  How long does it take to get from the Sun to Neptune using the heel-to-toe method?


9.  When you are at Neptune, record how big the Sun appears.   The size of the “Sun,”  can be measured at each position (Earth, Jupiter, and Neptune) by holding a ruler at arm’s length to determine the apparent diameter of the Sun picture or the length of the sign.  Write down how many centimeters in diameter the Sun appears.


2. Students may wish to use the internet to gather information that would allow them to calculate how long it would take for a spaceship from Earth to reach Mars (the first step people consider with respect to exploring the solar system). Time to reach more distant planets can also be calculated, if desired.


3. What has to be considered in planning for humans to travel to and to explore on Mars? Think about both the trip to Mars, exploration phase, and the return trip to Earth.